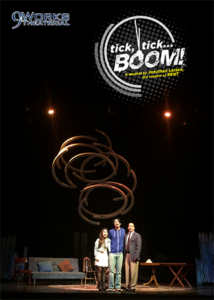 tick, tick… BOOM! is a musical written by American composer Jonathan Larson, who won a Pulitzer and three Tony Awards for his musical RENT. tick, tick… BOOM! tells the story of an aspiring composer named Jon, who lives in New York City in 1990. Jon is worried he has made the wrong career choice to be part of the performing arts. The story is autobiographical, as stated by Larson’s father in the liner notes of the cast recording – Larson had been trying to establish himself in theater since the early 1980s.

Larson began to perform the piece as a solo work in 1990. After his death in 1996, it was revised and revamped by playwright David Auburn as a three-actor piece and was premiered Off-Broadway in 2001. Since then, the show has had a Off-West End production, a West End production, an American national tour, two Off-Broadway revivals in 2014 and 2016, and numerous local and international productions. 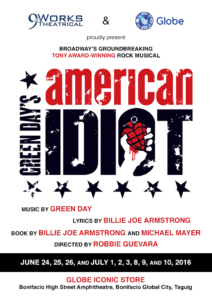 The book was written by Billie Joe Armstrong and director Michael Mayer. The music was composed by Green Day and the lyrics were by Armstrong. The score included all the songs from the original American Idiot album, as well as additional Green Day songs from other sources, such as the album 21st Century Breakdown, and unreleased songs originally recorded for the American Idiot musical.

It was top-billed by local rock icons Jason Fernandez as Johnny, Miggy Chavez as Will, and Nel Gomez as Tunny.

9 Works Theatrical’s American Idiot was co-produced by Globe and ran from June 24 to July 10, 2016 at the Globe Iconic Store, Bonifacio High Street Amphitheatre. 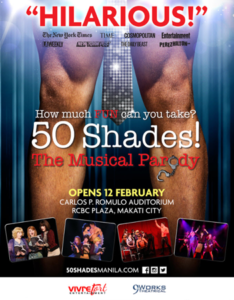 50 Shades! The Musical Parody is the sexy and hilarious send-up of Fifty Shades of Grey, the greatest novel EVER. The show had audiences rolling on the floor, dancing in the aisles and BEGGING for more.
In cooperation with VivreFort Entertainment, 9 Works Theatrical brought this hilarious musical comedy that starred Greg Kata and Lorenz Martinez as Christian Grey, and Brenna Wahl and Karel Marquez as Anastasia Steel. Supporting cast included Bituin Escalante, Chloe Williamson, Kaitlyn Froton, Julz Savard, Casey Renee Rogers, Isaac Saleh, and Chris Hodgson.
Directed by Al Samuels
50 Shades! The Musical Parody ran from February 12 to March 30, 2016 at the Carlos P. Romulo Auditorium, RCBC Plaza. 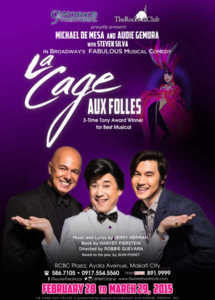 La Cage aux Folles (Book by Harvey Fierstein and Music and Lyrics by Jerry Herman) is the only 3-time Winner for Best Production at the Tony Awards (Best Musical in 1983, Best Revival of a Musical in 2004 & 2010) and Winner for Best Musical Revival at the Laurence-Olivier Awards for its 2008 London performance. 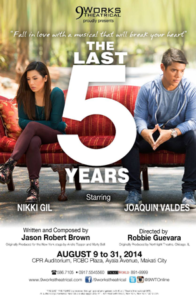 The Last 5 Years is an off-Broadway musical by Jason Robert Brown.

The story explores the five-year relationship between Jamie Wellerstein, a rising novelist, and Cathy Hiatt, a struggling actress. The show uses a form of storytelling in which Cathy’s story is told in reverse chronological order – beginning the show at the end of the marriage. Jamie’s story is told in choronological order – starting after the couple first met. The characters do not directly interact with each other except for a wedding song in the middle as their timelines intersect.

The musical starred Nikki Gil as Cathy and Joaquin Valdes as Jamie. 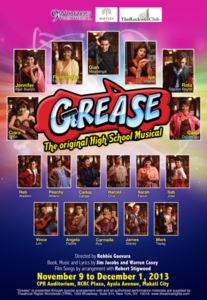 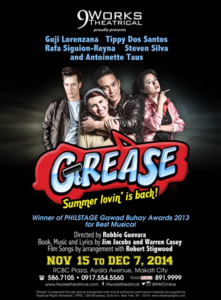 Grease is a musical by Jim Jacobs and Warren Casey.

It was first performed in 1971 in the original Kingston Mines Theater in Chicago. At the time that it closed in 1980, Grease’s 3,388-performance run was the longest yet in Broadway history. It went on to become a West End hit, a hugely successful film, two popular Broadway revivals in 1994 and 2007, and a staple of regional theatre, summer stock, community theatre, and high school and middle school drama groups. It remains Broadway’s 14th longest-running show. 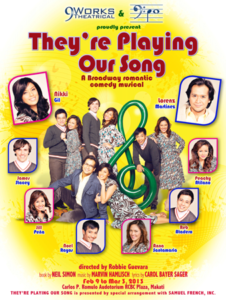 They’re Playing Our Song (Book by Neil Simon, Music by Marvin Hamlisch, Lyrics by Carol Bayer-Sager) is one of Broadway’s most popular and classic romantic musical comedies. 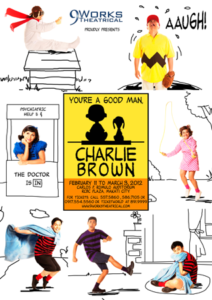 You’re A Good Man, Charlie Brown (Music and Lyrics by Clark Gesner) is the outrageously funny and heart-warming classic Broadway musical based on the characters created by cartoonist Charles M. Schulz in his comic strip Peanuts. 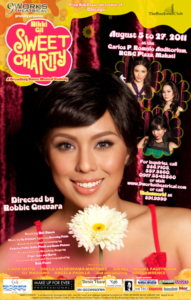 Sweet Charity (Book by Neil Simon, Music by Cy Coleman, Lyrics by Dorothy Fields, and Conceived, Staged, and Choreographed by Bob Fosse whose name is synonymous to All That Jazz and Chicago) is about a taxi dancer’s adventures and misadventures in the ways of love and who always gives her heart, and her earnings, to the wrong man.

It featured Nikki Gil as Charity, Ciara Sotto as Helene, Shiela Valderrama-Martinez as Nickie, Sheree as Carmen, Miguel Faustmann as Herman, OJ Mariano as Vittorio Vidal and Daddy Brubeck, Angela Padilla as Ursula and Kris Lawrence as Oscar Lindquist, in his first ever foray into theatre. 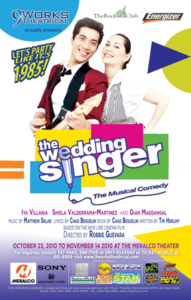 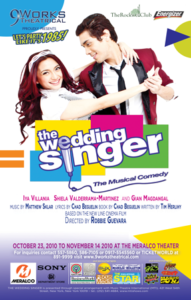 The Wedding Singer takes us back to a time when hair was permed, neon was in, collars were up, and a wedding singer sporting a mullet just might be the coolest guy in the room. The place is New Jersey. The time is 1985.

The Tony Award-nominated musical captured the hearts of audiences all over America with its mind-blowing tribute to the pop songs of the 80’s. Its hilariously written script, and songs like “Someday,” “If I Told You,” and the phenomenal hit, “Grow Old With You” with music by Matthew Sklar, lyrics by Chad Beguelin, and a book by Chad Beguelin and Tim Herlihy, was a surefire hit amongst the local musical theater scene. 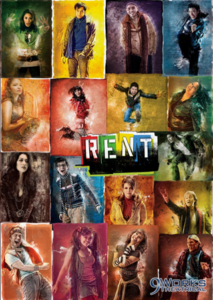 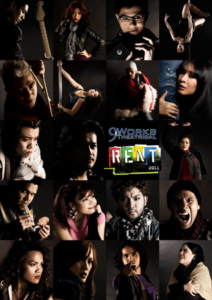 RENT is a rock opera with music and lyrics by Jonathan Larson based on Giacomo Puccini’s opera La Bohème. It tells a story of a group of impoverished young artists and musicians struggling to survive and create in New York’s Lower East Side in the thriving days of Bohemian Alphabet City, under the shadow of HIV/AIDS.

On Broadway, RENT gained critical acclaim and won a Tony Award for Best Musical among other awards. The musical is largely responsible for helping to increase the popularity of musical theater amongst the younger generation. The Broadway production closed on September 7, 2008, after a 12-year run and 5,124 performances, making it the eighth longest-running Broadway show. The production grossed over $280 million.

The success of the show led to several national tours and numerous foreign productions. 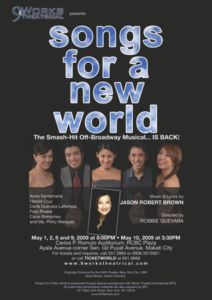 Songs For A New World is an Off-Broadway Musical, written and composed by Jason Robert Brown. The show presents life as the way we regroup and figure out how to survive in a new set of circumstances – a new world – even against seemingly overwhelming odds. These are songs about that new world, a world in which the definitions of family, distance, money, technology, the very nature of human contact is changing every day, a world in which the rules don’t apply as often as they do, a world in which the solutions our parents found don’t work for us, and a world in which today’s answers probably won’t apply tomorrow.